At the time it was laid out in 1857, Holyhood Cemetery reflected the mid-19th century influence of romantic landscape cemetery planning begun at Cambridge's Mt. Auburn Cemetery in the 1830's. It was the first such cemetery in Brookline. The name Holyhood was derived from the term used to designate the winding sheet in which the body of our Saviour was surrounded before interment. 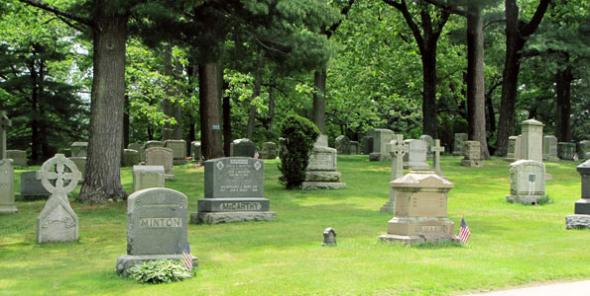 Holyhood was already outgrowing its space by the late 19th century, and in 1888 the Directors purchased additional land nearby in West Roxbury to develop St. Joseph Cemetery. At about 200 acres, St. Joseph is one of the largest cemeteries in New England. Extensive landscape improvements have been carried out over the last ten years, and the main cemetery is almost fully developed.

In 1950 the Directors opened a new section on VFW Parkway called St. James the Apostle.

Additionally, there are several historical structural features and prominent political and cultural figures whose interment at Holyhood and St. Joseph’s Cemeteries add to their rich history.

For maps of the Cemetery grounds click the links below.